Welcome to the refuge at El Palau d’Anglesola.
In case of issues, you can call the volunteer responsible during the week.

This humble space is aimed to provide rest and support to your journey. Therefore:
Take care of the facilities and equipment.
Leave it as you found it so that next pilgrim can use it in good conditions.
Avoid cooking inside the enclosure.
Respect the rest of fellow pilgrims sharing the refuge.
Leave sheet and pillowcase in the rubbish bin.

Close the door when you leave and though the keys under the door.

Regulations:
You can access the refuge only with the appropriate stamped credential.
The keys are in the Bloc Shop (8.30h-13.30h, 17.00h-21.00h)
The maintenance fee is 5 €/person, to be paid at acquisition of the keys.
Prior reservations are not allowed. Places are awarded in order of arrival.
Facilities must be left before 9 am.
Thanks for everything ..... Good Trip!


Important information
(See directions on the refuge map)
NURSE
Walk-in visits from Monday to Friday, between 8am and 2pm. No appointment needed. Go to the Primary Health Center in the same building as the City Hall. If nobody is there, knock on the first door in the hallway and someone will assist you.
Nurse: Concepcio.

PHYSICIAN
The doctor’s surgery is located at the Primary Health Center, in the City Hall building. The schedule is from 9am on. You need to sign up on the list that is on the door as you come in. Should you go there by 8am you might be the first one to sign up and therefore be the first one to be seen by the doctor.
Doctor: Dr. Isidre Rodoreda.

PHARMACY
Open from Monday to Friday, mornings and afternoons, and Saturday mornings too. It’s right across from the church.
Pharmacists: Mr. Paco and Ms. Carme
Tel. 973.601.340

What can we visit in town?

Church of St. John the Baptist. (Neoclassical style, 1802)
Built by Francesc Albareda, master of Balaguer, between 1798 and 1807, it replaced an earlier church, which probably dated from the XIII century. There are references to this church since 1118 though. Its style is a blend of Baroque and Neoclassicism. The style of the upper part is Baroque. It has two double columns with Corinthian capitals that support an entablature broken in the middle of which there is a niche. On the right side stands the belfry. It has three different parts. Inside the church there is a baptistery.

Cal Massot (XVI century)
It is located in the old part of town, in St. John Street, near the church. Only the facade remains, which is one of the most remarkable constructions in town. It is all made of stone blocks. The balcony, the window and the portal are the main parts. There are imaginary animals and human figures carved on the capitals. Above the cornice you can still see the windows of the attic. There is an inscription on the wall (Massot 1761) with its date of construction.

Cooperative of San Roque Field
Sant Roc Agricultural Cooperative
Part of the building was built by Cesar Martinell Brunet, who was a disciple of Antoni Gaudí, the well-known Catalan architect. It has some modernist features. You can visit it every day in the morning. Call George, the manager, at the 973.601.315. It’s free of charge.

Farming tools Museum
It is a private collection of farm tools that takes you back a century. You need to contact Mingo Camps, the owner, on 973.601.964 to set up a visit. It’s free of charge.

Library “Pont i Gol”
Summer schedule is 12pm to 2pm. For the rest of the year, the schedule is 5pm to 7pm. Obviously, it’s free of charge.

Swimming pool
It is open in summertime daily from 11 am to 8 pm. You may get a discount with the Pilgrim card. Saint Roc Shrine
There is a new shrine dedicated to Saint Roc. It’s close to the refuge.

Squares and gardens
We suggest walking around the streets and squares, especially the Generalitat Square and Catalonia Square, where there are plenty of gardens. In the Generalitat Square you may find a monument to the Passion, a play that has been on stage in town for many years. In Catalonia Square you may see a metaphorical painting symbolizing the loss of freedom in this country.Camps Artisan Cheese
Robert Camps makes goat cheese. In 2012, his cheese was among the 50 best cheeses in the world and in 2013 he was awarded the Best Catalan Cheese Award. Contact Mr. Camps to set up a visit to his workshop.

Nature Handmade Soap
Find Irene at 33, Urgell St. She is a young woman who specializes in making handmade soaps. Call 650.522.766 or visit her website www.sabonature.com for further information.


A brief history of Palau
The name of the town is linked to the ancestry of Anglesola, but its origin seems to be earlier than the conquest of the place by the Counts of Barcelona and Osona. Later on, they would grant the land to the Lord of Anglesola. Although it was infrequent to conquer a barren area, once conquered, it became a border, as in this case. The site refers to an Arabic property, which possibly existed centuries before the Muslim occupation.

After several years of domination by the Templar Knights, the Palace of Anglesola would depend on the “Order of the Hospital”, who also ruled Sidamon, a nearby village.

By the XIV century, the palace was the property of King Henry II of Castile, who later would become the grandfather of Ferran of Antequera, first king of the Kingdom of Catalonia and Aragon, after the Compromise of Caspe because King Marti l’Humà died without leaving descendants.

Palau d’ Anglesola belonged to the Bishopric of Vic until 1593, when the Diocese of Solsona was set up.

The ancient castle palace is now in ruins, although the facade still remains, which is a gem from the XVI century. It is located in the town centre, where you can also find other buildings of remarkable artistic interest, most of them from the XVII century.
The church was built between the end of the XVIII century and the early XIX century. Its architectural style is late baroque and neoclassical. The patron saint is St. John the Baptist, and the parish celebrates its festival in honor of his martyrdom (August 29th). The town’s patron saint is Saint Blai, and its festival is held on February 3rd.
The inhabitants of Palau still hold two religious gatherings. In winter time, they celebrate St. Lucia (December 13th) in a small chapel near the cemetery. This chapel is located on the way to Poal, a nearby village. The second gathering is dedicated to St. Roc (August 16th) and it’s held in a brand new chapel built on the path to Fondarella, another nearby village. This new chapel is close to the old one, which was built in the XVIII century.

Another important building in town is the local Agricultural Cooperative (former Union of Wine). It was built by Cesar Martinell, who was a disciple of the well-known Antoni Gaudí. 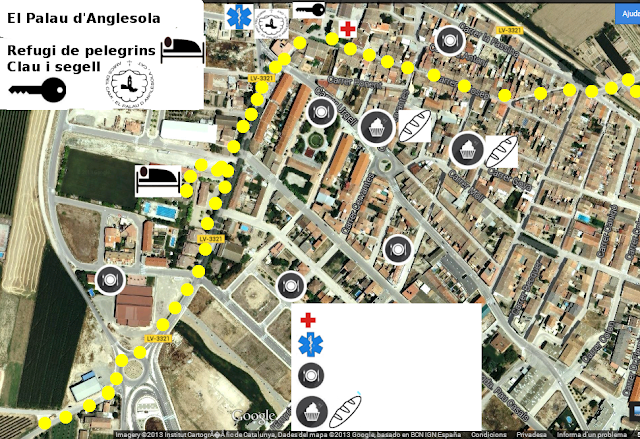 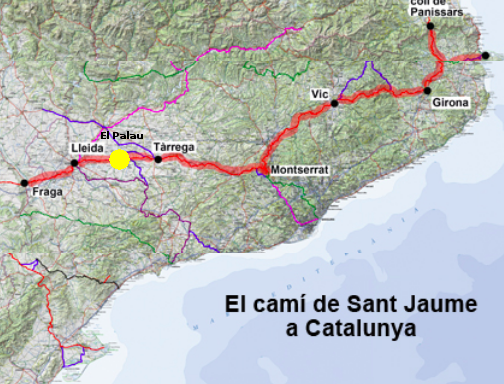 I've had the most amazing welcome and stay at Palau. I haven't met many people with such a generous heart before :). Many thanks!!
Daleen 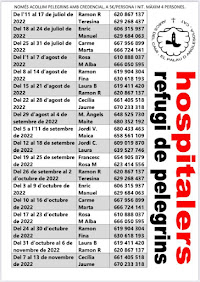 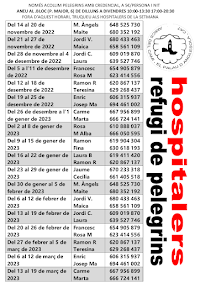 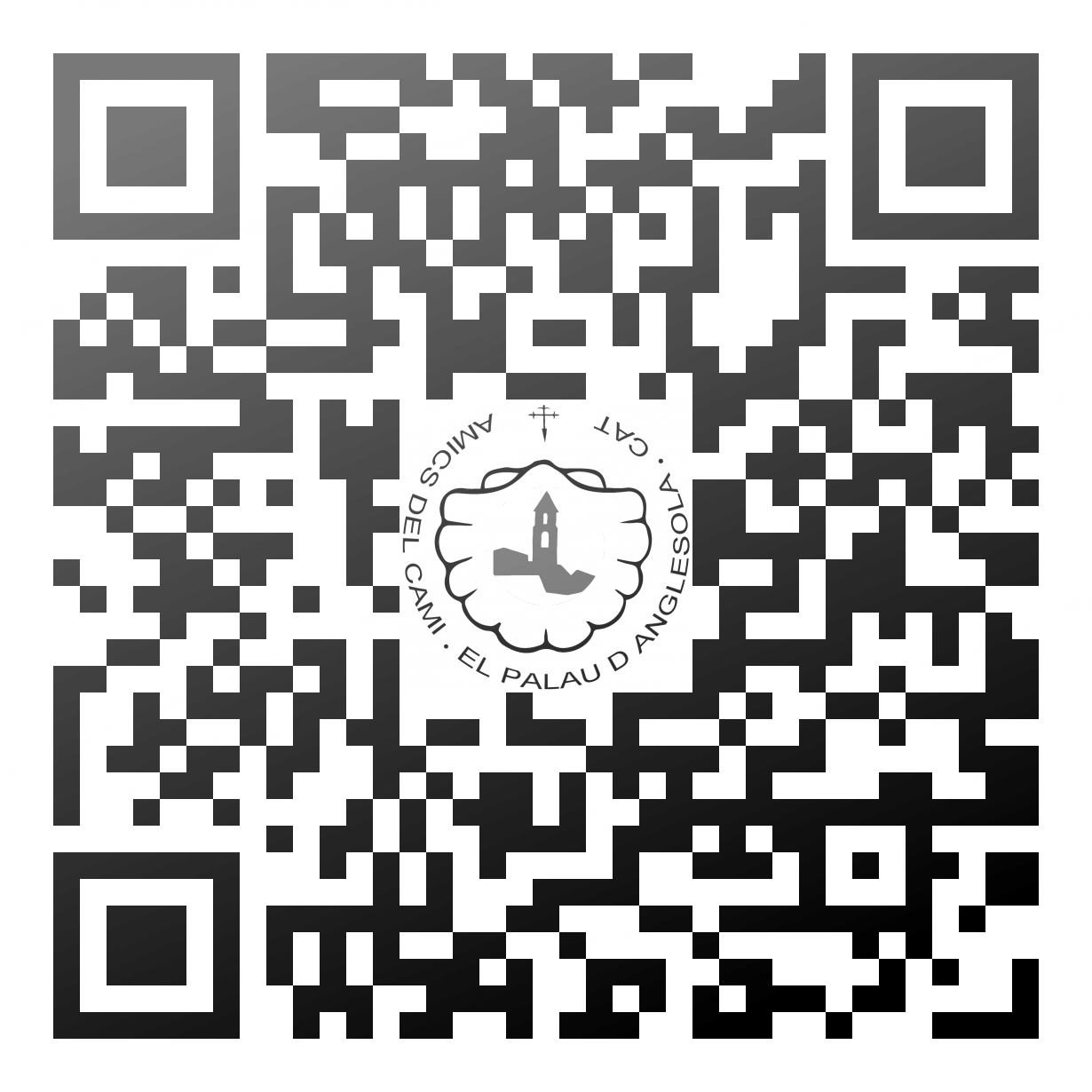